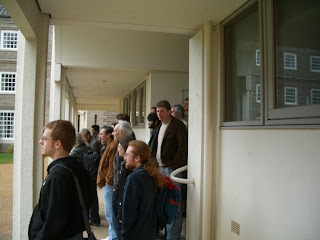 SPUC09 was an event that was organized by Mark Hogarth and Mike Stannett and it was founded by EPSRC . It attracted researchers from Computer Science, Mathematics, Physics, Biology, Artificial Intelligence, Economics, and Phylosophy. Delagates presented interesting ideas and the discussions that followed each presentation were very vivid. Personally, I had the chance to meet some new friends and to discuss with them some interesting ideas. Also, I had the chance to personally meet people with whom I had exchanged many e-mails in the past.
Δημοσίευση σχολίου
Διαβάστε περισσότερα

- Μαρτίου 30, 2009
Recently, István Németi pointed out to me that there is an omission in my book regarding the feasability of his relativistic hypercomputer. In particular, the following passage In 1974, Stephen William Hawking [80] proposed that black holes emit thermal radiation, now known as Hawking radiation, due to quantum effects. Thus, any black hole will vanish sometime in the future. If Hawking radiation is indeed a real phenomenon, then it is possible that a relativistic computer G will not be able to finish a particular supertask it was assigned to finish. The reason is that the black hole that the computer orbits around might evaporate years before the computer completes its task. Moreover , Hawking radiation should play a role in cases in which the black hole has very small mass. For instance, a black hole of one solar mass will evaporate in 10 67 years, while a black hole of 10 16 kg will evaporate in 3 billion years. the word Mo
Δημοσίευση σχολίου
Διαβάστε περισσότερα
Περισσότερες αναρτήσεις